A Trust in Tradition Crowds Out the Truth 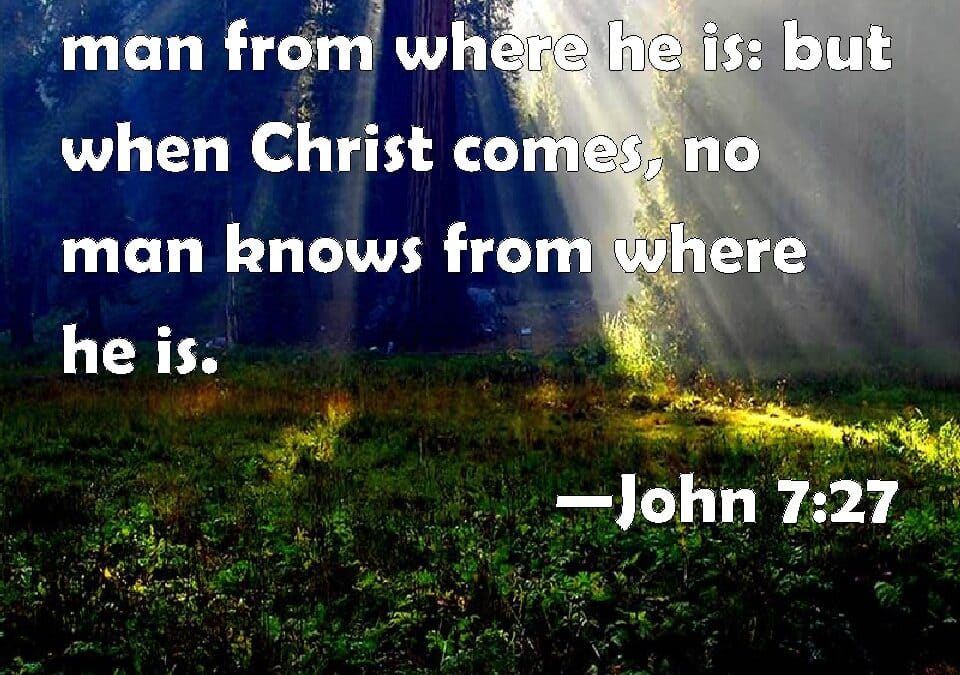 In contrast to the highly unlikely possibility in John 7:26, these people continue their rationalization in v.27, which exposes a major problem in their minds with Jesus’ claims to be the Christ—We know where he is from (Nazareth of Galilee), but everyone knows that when the Messiah comes, no one will know where he came from. What do they mean by this since there are some in v.42 who were rightly able to point to the birthplace of the Messiah as Bethlehem from the Scriptures (Micah 5:2)? Well, extrabiblical Jewish writings, based on isolated interpretations of Mal. 3:1, maintained that the Messiah would arise suddenly to come and accomplish his redemptive work, after which he would immediately reign on the throne. This same kind of understanding was probably behind his brothers’ admonitions in vv.3-4. Thus, the way that Jesus conducts himself is counterintuitive since he has been ministering for over 2 years and hasn’t even been in Jerusalem for about a year.

So based upon the traditional interpretations of their day, these Jerusalemites have successfully discredited Jesus as the Messiah. They have the Word of God incarnate in their midst, the one who is “The Truth” and they override him with their traditional understandings. This is inevitable according to what Jesus teaches elsewhere in Mark 7. Jesus’ point is clear in that text—when traditions are elevated to the primary way to honor God, God’s word is set aside.

This can happen in preferential issues, whether corporately or individually, such as worship service music selections or personal medical considerations or kids’ schooling choices. Oftentimes, this occurs when an outworking of a Bible verse becomes the actual truth itself. No longer can that verse be applied in different ways and to different situations, but it can only have one possible application and to not apply it that way is to disobey the Lord. Over time the authority of God’s word erodes away and those entrenched in traditions become blind to the truth.

In the case of these Jerusalemites in John 7, their traditions had blinded them to the presence of the greatest revelation of God ever supplied in the person of Jesus Christ, who was sent directly from heaven.