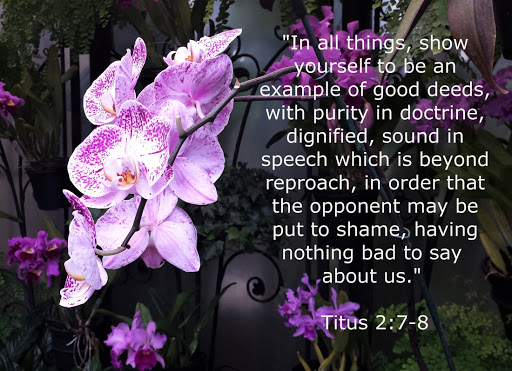 According to Titus 2:8, possessing the characteristics in vv.7-8 will lead Titus to be above reproach or beyond a legitimate accusation.  Keep in mind that the entire package must be present in one’s teaching in order to receive this level of credibility.  The motive, manner and message must be free from self-exaltation.  It follows then that if one of them is missing, then one’s teaching is not above reproach.  This means that someone cannot be an example to young men or any men if one is preaching for the sake of popularity, evidenced by watering down the message in order to try to make it acceptable to unbelievers.

Now just think about this verse compared to what is said to give ministry credibility in our day—size, growth rate, number of followers on a blog and lastly community perception, as it relates to what’s important to the culture.  None of that stuff makes anyone above reproach!   How many examples could we think of where someone had all those things, but also had at least one area of reprehensible character?  That person was not above reproach because there is a legitimate accusation that can stick.

On the other hand, if someone has a faithful motive, manner and message, the only legitimate accusation from those who don’t follow Christ is this—”we don’t like what he says.”  So if a man is preaching the truth in a dignified way and with a proper motive, and someone objects, then there’s nothing that can be done about that.  It follows then that being above reproach doesn’t mean that accusations won’t come; it means that none of them are legitimate in the eyes of God.