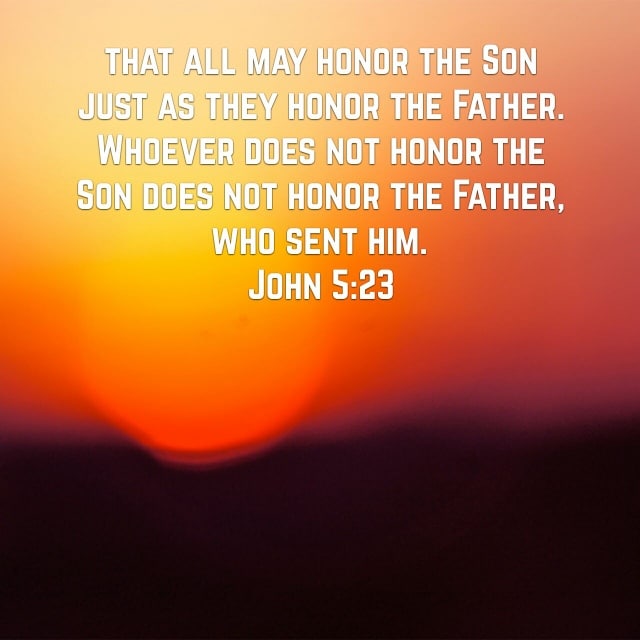 In light of the Son’s identical divine work as the Father, as put forth in John 5:19-23, how certain are Christ’s works in our redemption and how trustworthy is his wisdom in his teachings! It’s no wonder the Apostle Paul declares in Col. 2 that all the treasures of wisdom and knowledge are found in Christ. Later in that same chapter supplies some further teaching regarding the person of Christ in Col. 2:9 For in Him all the fullness of Deity dwells in bodily form, 10 and in Him you have been made complete, and He is the head over all rule and authority…

If we are complete in him in whom all the fullness of Deity dwells, then we shouldn’t even remotely consider going anywhere else to gain knowledge about God and spiritual resources, which is precisely the context of Col. 2:9-10, indicated by the “for” at the beginning of v.9, which makes the verse the reason for v.8 See to it that no one takes you captive through philosophy and empty deception, according to the tradition of men, according to the elementary principles of the world, rather than according to Christ.

The teachings and actions of Christ recorded in Scripture are the exact teachings and actions of God, which means you can know God fully through his revelation. However, some are tempted to say: “I’m not satisfied with knowing God through Christ in the Word. I need something more exciting or even something more personal.” Well, as soon as you find another source that has the identical unity with the Father and portrays the Father with the same authentic representation, then go ahead and embrace it, but just a word of caution—you won’t find anyone or anything that can reveal God more clearly than the incarnate Son of God because he and only he is one with the Father! So….quit looking!

The Jewish leaders in John 5 were blind to the greatest revelation of God they could possibly ever receive because they were committed to their traditions more than what God had already revealed. We can be tempted to exalt religious traditions and even worldly ideologies above God’s revelation when we want to feel better about ourselves or our sin and we can also do that to find some quicker external fixes to some of our problems. However, when relief from a burdened conscience becomes more important than pursuing Christlikeness, then we certainly won’t come to Jesus as the only answer to our real problem and the only place to find power to defeat that problem of sin.  There is no comparison to the sufficiency and worthiness of the Son.