God’s Intention in Testing Our Faith 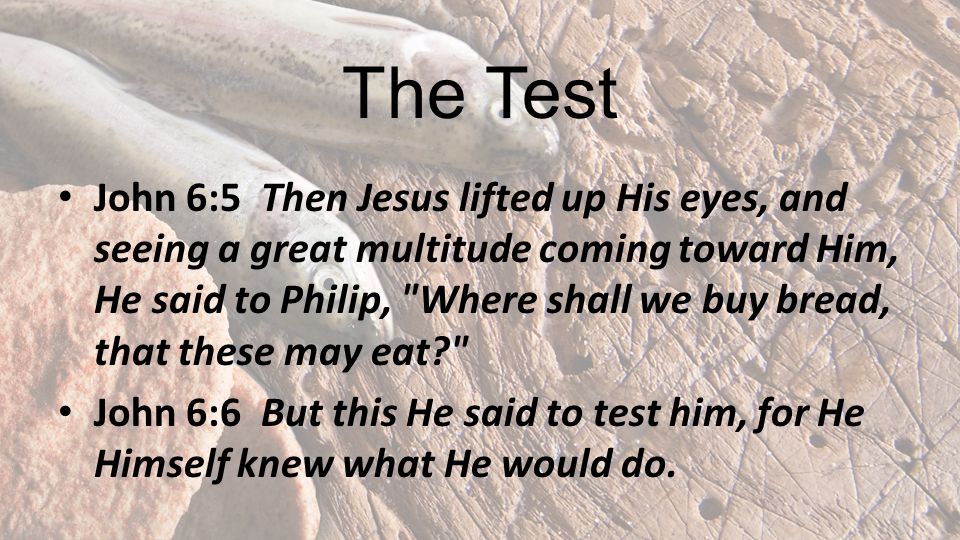 In John 6:6, the reader is informed that Jesus’ question to Philip in v.5 is designed to give Philip an opportunity to express his faith in the One he has chosen to follow. Now this word for test has a wide scope of meaning in the NT and is even translated tempt in many verses.

Here’s how we make the distinction—When God tests someone, his intentions are righteous and good, mainly designed to affirm one’s faith. The most well-known example of God testing someone is Abraham, about whom the author of Hebrews says in 11:17 By faith Abraham, when he was tested, offered up Isaac, and he who had received the promises was offering up his only begotten son…

On the other hand, when Satan tempts someone, it is for the purpose of enticing to sin. Such was the case in the early part of the Synoptic gospels when Jesus was led into the wilderness in order to be tempted by the devil. Satan’s clear intention was to attempt to get Christ to commit idolatry and also subvert God’s plan of redemption.

Therefore, the motive of the one doing the testing or tempting is the essential factor in determining how the word is being used. Understanding the difference between the testing of our faith and temptation to sin is such an important theme in the opening chapter of book of James. In the same chapter James writes—2 Consider it all joy, my brethren, when you encounter various trials, 3 knowing that the testing of your faith produces endurance…[And then] 13 Let no one say when he is tempted, “I am being tempted by God”; for God cannot be tempted by evil, and He Himself does not tempt anyone. 14 But each one is tempted when he is carried away and enticed by his own lust. 15 Then when lust has conceived, it gives birth to sin; and when sin is accomplished, it brings forth death.

God doesn’t tempt anyone by dangling sinful things and opportunities in front of us like a worm on a fishhook hoping we will take the bait and get caught. No, that is not in his nature. Rather, he has tailormade situations for us, in which we are able to respond in faith according to the resources he supplies. God loves us enough to not let us continue with a weak faith. He knows exactly what needs to happen in order to obtain stronger faith. And in doing so, He doesn’t leave us to ourselves, but nevertheless brings circumstances that require something not originating from ourselves, namely divine power. And keep in mind that he already knows what is going to happen, which is a truth that should bring us great comfort and confidence. Thus, his intention is to produce a stronger faith and simultaneously a greater endurance.

However, it’s in these times of testing that we can choose to operate in the flesh and subsequently lose sight of God’s purposes, which leads to a shaky faith. We can give into the deceit coming from our hearts and/or from the enemy that says that God is out to get us; that he’s either unwilling or unable to sustain our faith. We can then ask, as the doubter in James 1: “Why is God doing this?” Besides many other potential possibilities, we can bank on at least one answer to that question and that is that God is seeking to refine and strengthen our faith.