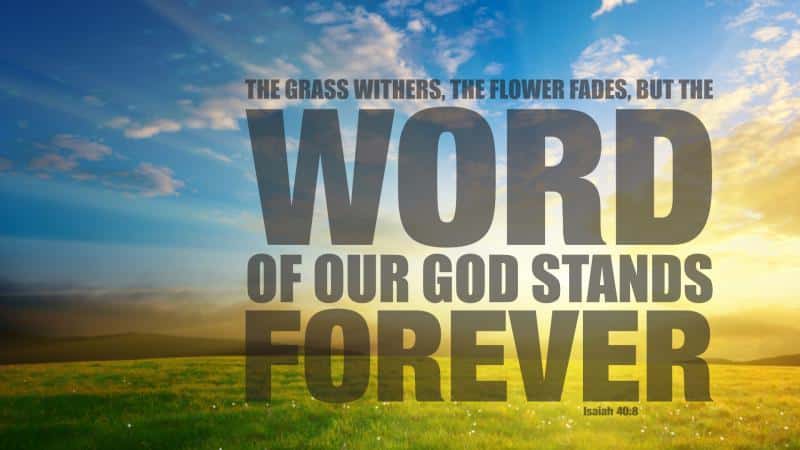 There are 4 reasons, based on the character of God, that we can place wholehearted confidence in our Bibles: 1. God proactively chooses to reveal himself Surely, we do not know him to be a God who delights in hiding his truth from his people. This is one of the distinctives about the God of the Bible in that he clearly reveals himself to Adam, Abraham and Moses. He’s not a figment of man’s imagination and thus a fake god who cannot speak. No, due to a desire to be known, he has always proactively spoken to mankind and the greatest expression of his revelation is in the person of Jesus Christ—Heb. 1:1 God, after He spoke long ago to the fathers in the prophets in many portions and in many ways, 2 in these last days has spoken to us in His Son, whom He appointed heir of all things, through whom also He made the world. 3 And He is the radiance of His glory and the exact representation of His nature, and upholds all things by the word of His power…Now think about the implication of the future church not having an accurate witness of this supreme revelation found in Jesus Christ. In that case God could say: “I’m going to send my only begotten Son to reveal my glory to the world, but then I’m going to allow the written witness to be lost so that my revelation through him is hidden from future generations.” That’s highly unlikely since it is written in John 3:17 For God did not send the Son into the world to judge the world, but that the world might be saved through Him. God’s word illumines the wrong path, the right path and ultimately the way to salvation through Jesus Christ. Consider Ps. 119:105 Your word is a lamp to my feet And a light to my path. Is that only true for the Psalmist up to the 1st century church or is it true for God’s people of all time?

The 2nd reason, based on the character of God, that we can place wholehearted confidence in our Bibles is that…2. God expects a protection of truth The NT is replete with examples of this expectation from God, such as…2 Tim. 1:13 Retain the standard of sound words which you have heard from me, in the faith and love which are in Christ Jesus. 14 Guard, through the Holy Spirit who dwells in us, the treasure which has been entrusted to you…2 Tim. 2:15 Be diligent to present yourself approved to God as a workman who does not need to be ashamed, accurately handling the word of truth. And just in case you think this is limited to the pastoral office, listen to…Jude 3 Beloved, while I was making every effort to write you about our common salvation, I felt the necessity to write to you appealing that you contend earnestly for the faith which was once for all handed down to the saints. These would be impossible tasks to accomplish if the sounds words and words of truth were unable to be definitively identified. How can you be held responsible to guard something in which you were given little to no details about what you were supposed to guard? Imagine being asked to guard someone’s car in a large parking lot from getting dinged up or broken into. Perhaps you agree and then ask: “Which one is yours?” And the person responds: “I already told you to please guard my car.” “How do I know which one is yours?” “Because it’s mine!” That’s confusing and frustrating, but our God is not a God of confusion because he knows how to communicate clearly and preserve that communication. Even as far back as Deut. 29:29, the Bible teaches this concept of protecting what God has revealed–“The secret things belong to the Lord our God, but the things revealed belong to us and to our sons forever, that we may observe all the words of this law. That purpose clause on the end of that verse leads to the 3rd reason…3. God greatly delights in being obeyed A significant way God receives glory is through the obedience of his people and how can anyone obey him if they don’t know specifically what he has said? For instance, Samuel declares this to Saul in 1 Sam. 15:22…“Has the Lord as much delight in burnt offerings and sacrifices As in obeying the voice of the Lord? Behold, to obey is better than sacrifice, And to heed than the fat of rams. Then from Jesus’ own mouth in John 14:21 He who has My commandments and keeps them is the one who loves Me; and he who loves Me will be loved by My Father, and I will love him and will disclose Myself to him…23 Jesus answered and said to him, “If anyone loves Me, he will keep My word; and My Father will love him, and We will come to him and make Our abode with him. 24 He who does not love Me does not keep My words; and the word which you hear is not Mine, but the Father’s who sent Me. Again, all this is impossible if his people did not perpetually have access to his word. Thankfully God does not have this disposition: “I’m going to expect you to love me and I’m going to command you to love me, but you’re going to be in the dark pertaining to how to do so.” No, if God delights in something then he will make sure he brings it about.

The 4th and final reason, based on the character of God, that we can place wholehearted confidence in our Bibles is that 4. God has historically preserved his word The 22nd chapter in 2nd Kings highlights a bright spot on the dark road of Judah’s kings. King Josiah brought in major reforms to the southern kingdom and although King Josiah did not purposely seek to discover a copy of the law, it was during his decreed repairs of the temple to restore proper worship, that a copy of the law was found. This copy had survived the deliberate dismantling of the temple and repudiation of the commands of Moses from the previous 2 kings, who pushed the limits of their rebellion against the Lord. Once found, King Josiah commanded the law be read publicly so that he and the people could renew the covenant with their God. All this was the result of God preserving his word through a copy of a scroll, even despite those who were adamantly against the law of God.

This corresponds to the entire period of redemptive history, during which God’s word has been an unstoppable force. This is not only due to the word coming from God through inspiration, but also due to the word being protected by God in preservation. Even if we were alive at a time when the only option was the KJV or even the Geneva Bible before that, we would have all the teaching we need for life and godliness, including the pure gospel message.