The Voice of Christ is Distinct 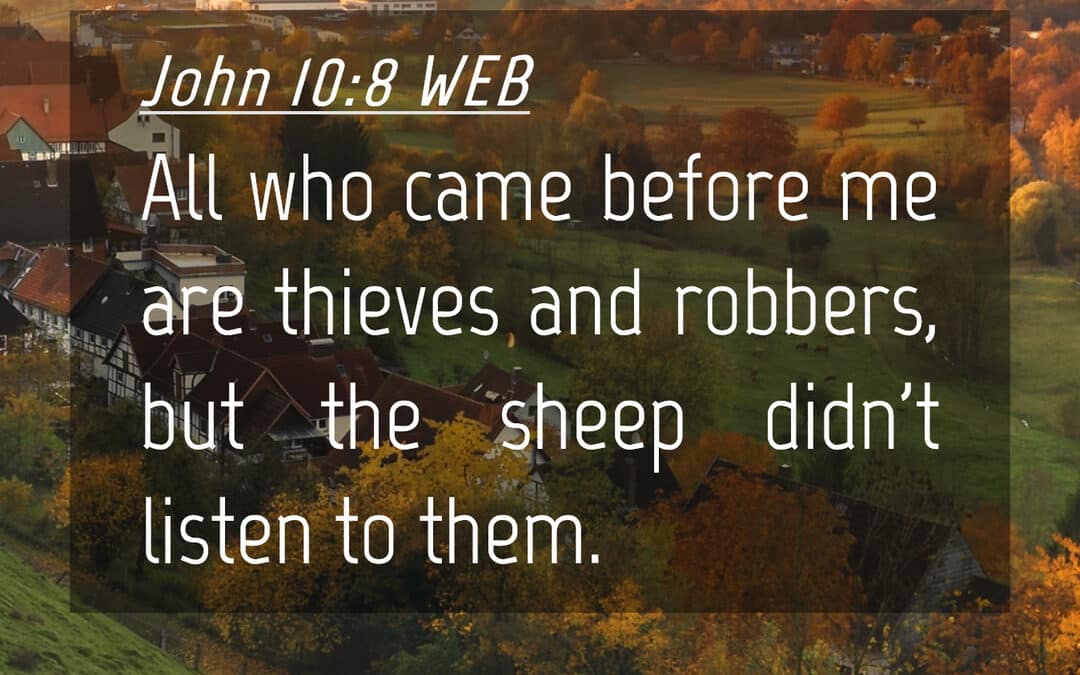 In John 10:5 and 8, Christ teaches that his sheep do not plunge themselves into strange teachings. Just to clarify—this teaching is not denying the reality of different maturity and discernment levels and seasons of growth, but instead, that if someone is attracted to and remains under bona fide false teaching, that person cannot know, at that time, that he or she is one of Christ’s sheep. Reason being, this is a major aspect of the Lord’s care for his sheep, that he not only leads them to himself, but protects them from following thieves and robbers who do not lead the sheep to healthy pastures, but instead deceive them and fleece them and devour them. What incredible care and protection we have from the Lord giving us his words and keeping us from that which can harm us! He continually gives us an ear for his voice alone and thus, when a strange voice comes across our path, we don’t listen, but we flee from it because it’s so contrary to the voice of our shepherd.

Now I highly doubt any of us are too susceptible to succumb to the teachings of the Pharisees and false Messiahs, as this original audience was, so how do we identify the voice of strangers in our day? Clearly those have a false gospel (anyone who denies substitutionary atonement or the imputed righteousness of Christ by faith alone) or a false view of Christ (not fully God or fully man) or false views of the Christian life that deemphasize sanctification and holiness. Another example would be the strange voices of worldly thinking, which are often things attempted to be assimilated into Christianity. For instance, psychology is not the voice of Christ. We can know that because the problems are not given biblical labels and therefore the solutions are not found in what Christ provides. Also, getting caught up with scientific facts and using them as the authoritative standard by which to measure biblical truth is also not the voice of Christ. Moreover, putting hope in politics and in seeking to enact a theocratic or conservative nation has nothing to do with the voice of Christ. And lastly, diving into conspiracy theories in the supposed cause for the quest of truth is not the voice of Christ.

Christ’s sheep hear his voice and thus are protected from other voices that will not lead to spiritual health.