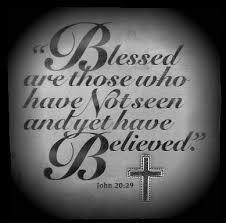 While John’s response in John 20 is better than seeing the empty tomb and disbelieving in Christ’s resurrection and even probably better than Mary’s assumption of foul play with Jesus’ body, yet it is not a true faith because if John’s faith is only able to operate off of what he sees, then what’s going to happen a couple weeks from now when Christ ascends into heaven not to be seen by John again until he’s banished decades later to the island of Patmos?  That’s why an observational faith is shaky, inconsistent and easily discarded when things don’t go as planned.  It’s not really a faith at all because it’s not grounded in the unchanging, absolute truth of God’s word.  A.W. Pink nailed it with this statement in his commentary on John: “The Holy Spirit here contrasts a faith which rests on the Word of God, with an intellectual assurance which proceeds from mere external evidence. Much has been made by Christian apologists of the value of “evidences,” but it has been greatly overrated. Creation demonstrates a Creator, but the outward proofs of His hand do not move the heart, nor bring the soul into communion with Him—the written Word, applied by the Spirit, alone does that!”[1]

On the contrary, this observational faith is evident in those who give cheap praise to God when things are going how they want, but then get bitter, fearful and/or depressed when the unexpected comes and their faith is tested and shown to be lacking.  By definition, it takes much more than the ability to draw logical conclusions based on observations to truly believe in God.  In fact, oftentimes, obedience to God will seem illogical to the natural mind and thus if we live by an observational faith, which is really living by sight, then our obedience to God will be severely hindered or even non-existent.  It’s no surprise then that living like this also indicates that there is severe pride and self-reliance.